Guardian reporter Dave Stewart spent the afternoon recently with a group of monks with the Great Enlightenment Buddhist Society monastery in Little Sands. The group bakes thousands of rolls of bread each week for a number of non-profit organizations in an attempt to pay back the kindness Islanders have shown them. The monks also presented Stewart with some treats, which he is holding, as a token of their appreciation for his visit.

Prince Edward Island, Canada -- Buddhist monks believe they are making the world a better place, one kind act at a time. 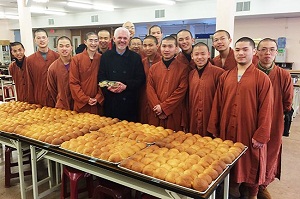 I had the pleasure of seeing that first-hand recently by spending the afternoon with a group with the Great Enlightenment Buddhist Society monastery in Little Sands.

I watched as they turned massive amounts of dough into thousands of bread rolls, reiterating over and over again how at the very core of their beliefs is a desire to help out the less fortunate.

"We believe the more we do to help others, the more happy we will be,'' Venerable Dan told me.

The bread products they make go to the Upper Room, Salvation Army, P.E.I. Food Share, Island Mothers Helping Mothers, school breakfast programs and any benefits they are asked to help out with.

They allowed me to sample the bread. It is quite daunting to stand there as dozens of Buddhist monks await your reaction.

The monks came across to me as genuine, honest, straightforward, caring group of people.

They seemed genuinely moved when I told them it was some of the best bread I had ever had — and it was.

My visit included a tour of the large prayer hall, which features gold-plated Buddha statues, displays of some of their Buddhist teachings and exhibits of their traditional hobbies. These exhibits feature everything from art to incredibly elaborate sculptures made out of butter.

The Little Sands monastery is made up of 15 buildings. The surrounding area includes a wetland, woods and a walking trail.

I was greeted upon arrival by Venerable Dan and Geoffrey Yang, who handles media relations for the society. They are shy when you first meet them, but the effort to please from the moment you hit the ground is almost overwhelming.

Many of them either speak English or are in the process of learning how. They understand a lot of Islanders still consider them a mystery, but the society is making efforts to reach out to the mainstream. A visit, such as this one, is proof of that.

I asked them why they chose P.E.I. to settle. The monks told me they preferred the serenity of the Island to the big cities in Canada. The kindness of Islanders was ultimately what cemented their decision.

When it came time to leave, they walked me out as a group to my car and seemed genuinely pleased that I had taken the time to get to know them a little bit.

If you're curious to see it first-hand, I highly recommend a visit to the monastery in May when the society holds its annual open house.